Gaberonne Swamp, like many of us, needed to watch its salt intake. A one-two-punch of insufficient freshwater inflow and saltwater intrusion had diminished the wetland’s capability to support its rich diversity of animal and plant life. Part of the old Spanish Land Grant of 1781, Gaberonne Swamp was the site of a former rice plantation. The Scenic Heights area surrounding Gaberonne Swamp had long been identified as an area that needed a stormwater makeover. Over the years, large residential developments grew around the swamp, many of which predated the implementation of stormwater regulations, and discharge much of their stormwater directly into Pensacola Bay. To borrow a quote from a classic commercial that used to run around the time much of this development occurred, “It’s not nice to fool Mother Nature”, and we had definitely fooled around with her plan for cleansing stormwater runoff and recharging Gaberonne Swamp. As is our unfortunate tendency, we were pretty rude houseguests as we developed the natural environment, and we owed Mother Nature an apology.

In order to restore the natural balance, the City’s engineering staff came up with a plan to divert the runoff from the densely populated neighborhoods around Langley and Old Spanish Trail to a brand-spanking-new retention pond that is being built on City property just east of the Montage subdivision located on Spanish Trail.

This project will serve as means to cleanse stormwater that flows from over 760 acres into Pensacola Bay and help restore the sensitive ecology of the Gaberonne Swamp system. Through the construction of an advanced treatment train process, an estimated 96,000 lbs of pollutants will be removed annually. That’s going to be hard to gift wrap, but hopefully, Mother Nature will enjoy it anyway. Stormwater will be routed to the new stormwater pond – where it will be treated prior to replenishing the swamp, and ultimately discharging into the bay.

The total cost of the project is estimated to be $3.2 million. Close to one-third of the cost will be paid for with the money that the City collects from stormwater utility fees. Emerald Coast Utility Authority (ECUA) is also a partner in the project and contributed $350,000. Approximately $1.8 million (around half the cost) is funded by state grants – another example of the commitment that the City has made to protect and improve water quality and help get the City of Pensacola our fair share of available state and federal dollars to make these improvements.

The project began in 2013 with the preparation of construction documents to retrofit the existing stormwater management pond at the intersection of Langley Avenue and Scenic Highway to restore the natural flow to the northern portion of Gaberonne Swamp. Barring unexpected delays, the anticipated completion date is December 2018. An educational kiosk explaining the importance of stormwater management to enhance bay water quality was placed at the Pensacola Bay Bluffs Park, a popular destination for city residents. A stormwater “spa day” and a kiosk to help drop some knowledge for the future….just one more step in correcting problems from the past, and helping Mother Nature feel like her old self again. 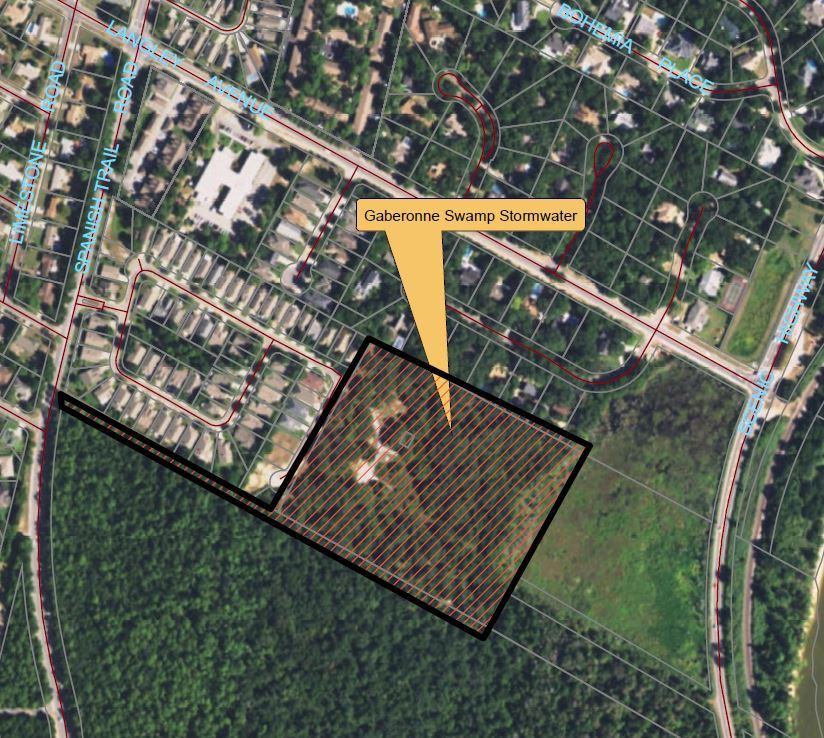 Photos of site and construction progress