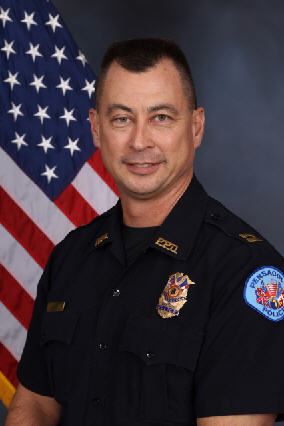 Captain Chuck Mallett was born in San Diego, CA, and traveled the world with his family as a “Navy brat.” One of the places his family landed twice during his father’s military career was Pensacola.

Captain Mallett graduated from Key West High School and went on to earn an Associate of Arts Degree in Criminal Justice from Pensacola Junior College and a bachelor’s degree in criminal justice administration from Columbia Southern University.

He was hired by the Pensacola Police Department as a police officer in August 1990, promoted to sergeant in January 2005, and lieutenant in November 2012. Among his assignments have been Uniform Patrol, Neighborhood Policing, Criminal Investigations, and Special Projects. He has served as a field training officer and also was a member and officer-in-charge of the department’s Honor Guard.

Before being assigned to the Criminal Investigations Division, Captain Mallett was the department's Administrative Captain, where he supervised daily operations within the Pensacola Police Department.

Captain Mallett is married and has four children.