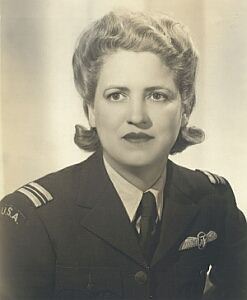 Jackie Cochran was born Bessie Mae Pittman in 1906 in Muscogee, a thriving lumber town on the border between Florida and Alabama, west of Cantonment. As a child, Jackie moved from place to place then spent time in this mill town with her adopted family.

She became a beautician and decided that the name Bessie Mae Pittman wasn’t sophisticated enough, so she looked in the phone book and picked out a better name - Jacqueline Cochran. At one time she worked in a beauty shop in downtown Pensacola. From there she rose to become one of history’s most accomplished female aviators. She learned to fly in 1932 while working as a cosmetics sales person. Her future husband Floyd Odlum had told Cochran that flying would help her get a leg up on her competition.