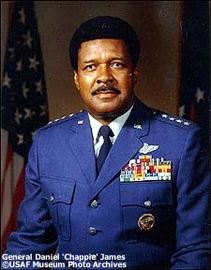 He was born in 1920 in Pensacola, Florida, near the Pensacola Naval Air Station. In his teens, he pointed to a plane flying above his home and said that one day he was going to fly. His friends quickly reminded him of his one handicap - he was black. Chappie didn't see it that way, however; he knew someday he would fly.

On June 7, 2018, the City of Pensacola celebrated the grand opening of the General Chappie James Museum and Flight Academy. It is located at his childhood home on 1608 Martin Luther King Jr. Blvd.

For more information on the museum and future offerings, visit the "Chappie" James Museum of Pensacola Facebook page.